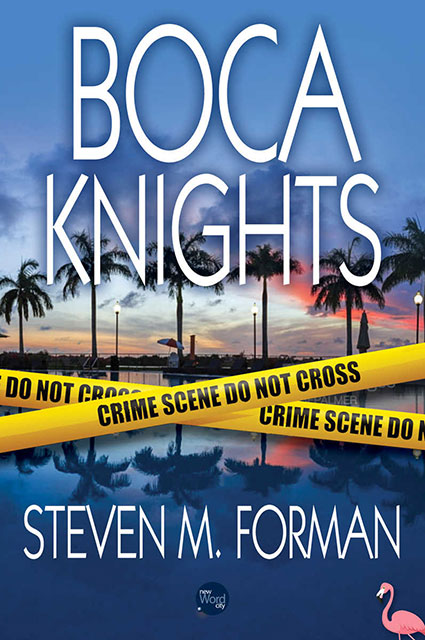 While many who grow long in tooth and gray of head look forward to moving to the Sunbelt and filling hours with shuffleboard and bingo, Eddie Perlmutter, retired from the Boston PD and relocated to Boca Raton, occupies his time rounding up hate-crime-committing Aryan thugs whom the bungling local force, unused to actual bad guys, fail to track down. Dubbed the Boca Knight in the first book in the series (Boca Knights, 2009), one-man-vigilante Eddie has now added random acts of altruism to his résumé (that and a lover half his age). He fills potholes left untended by a city-county jurisdiction squabble, busts cybercriminals and then finds them jobs, and even shows compassion for the offspring of an Aryan nudnik. His real challenge, though, is to find out what happened to an aging gay couple who went suddenly missing. This novel is long on clever dialogue and character development. Mystery readers of all stripes will like what they find here.

Ever wonder what would happen if you crossed Philip Roth with Elmore Leonard? This impressive crime debut may provide a hint. Long on back story, the saga of cop Eddie Perlmutter begins in a nineteenth century shtetl in Russia, where Eddie’s grandfather and the other villagers are prey to Cossaks and marauding bears. After demonstrating END_OF_DOCUMENT_TOKEN_TO_BE_REPLACED

With his first-ever book, author Steve Forman has created a “monster.” I mean that in a very positive sense: In Eddie Perlmutter --- a pugnacious, highly decorated ex-cop from Boston who “retires” to Boca Raton to avoid the bitter cold winters that cripple the arthritic knees broken by run-ins with Boston’s criminal element --- Forman END_OF_DOCUMENT_TOKEN_TO_BE_REPLACED

If in a gated or country club community anywhere in the state of Florida or if you grew up  in Boston, you owe it to yourself to read Boca Knights, a debut novel by Boca resident Steven M. Forman. It’s true he has focused his authorial magnifying glass on Boca Raton and his description of END_OF_DOCUMENT_TOKEN_TO_BE_REPLACED